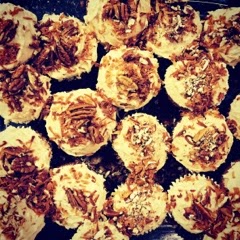 preheat oven to 350
Cupcakes
grease and flour a 12 cup muffin tin, and set aside
I use my kitchenaid/you can also use an electric mixer and bowl. Cream the butter and shortening on medium for 30-45 seconds. Add the sugar, beat until well combined. Add the egg yolks and vanilla and beat until combined. In a small bowl combine flour and baking soda; alternately add flour mixture and buttermilk to the butter mixture beating on low. Fold in coconut and pecans.

in a separate mixing bowl beat egg whites until stiff peaks form. fold about one third of the egg whites into cake batter to lighten. fold in remaining egg whites until combined. Spoon equal amounts of batter into each tin

Caramel
place brown sugar and putter in sauce pan on medium heat and cook until butter and sugar begin to melt *around 8-10 minutes* stir occasionally. When the sugar begins to caramelize, remove from heat and carefully stir in a few ounces of cream at a time. When cream is absorbed by the sauce stir in more doing the  same each time until all of the cream is used. When the sauce has reached a thick consistency. transfer to a mixing bowl and allow to cool, stirring occasionally. If needed, add 1 teaspoon of heavy cream to then out caramel as it cools

frosting
beat cream cheese, butter and vanilla until ligtht and fluffy. mixing on low gradually add in powdered sugar until well combined and smooth. Slowly drizzle in caramel sauce while mixer is on to create ribbons of caramel in the frosting.

decorate the top of each cupcake with frosting and then caramel drizzle or pecans or flaked coconut.